Last week I left you with this position, asking you whether Black had anything better than Rxh8.

You’ll notice that the black rook is looking at the white queen, but that there are rather a lot of pieces between them at present.

As several Facebook solvers spotted, Black can now play 1… e4 2. dxe4 Nxf3+ 3. gxf3 Bg3+ and, as if by magic, they’ve all disappeared. Now 4. hxg3 Rxd1+ 5. Kxd1 when White seems to have more than enough plastic for the queen, but then comes 5… Bxf3+ 6. Be2 Bxh1 7. Nd2 Bxe4 when material looks about level but White’s army is hopelessly uncordinated with his knight on h8 still stranded. Black is clearly winning here.

Santa arrived early this week, bringing the November 2019 issue of The Problemist (highly recommended for all fans of chess compositions).

As it’s Christmas and I’m feeling generous, this week I’m offering you two problems for the price of one. Just the thing for solving after the roast turkey and Christmas pudding while enjoying a glass of port.

This is a mate in 3 composed by Werner Speckmann, who specialized in miniatures, published in Frei Presse in 1972 where it was awarded a commendation.

When you’ve solved it, have a look at this. 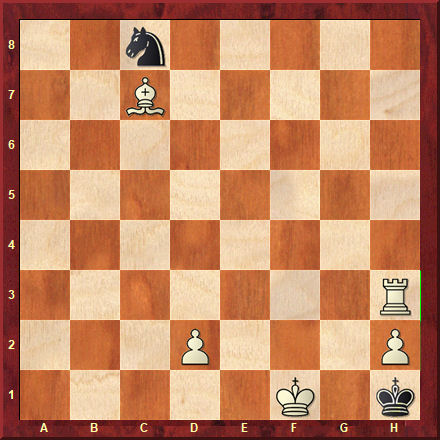 This is again a mate in 3: a version of the above problem, composed by Michael Lipton, and published in the May edition of The Problemist Supplement. What’s the difference, and why?